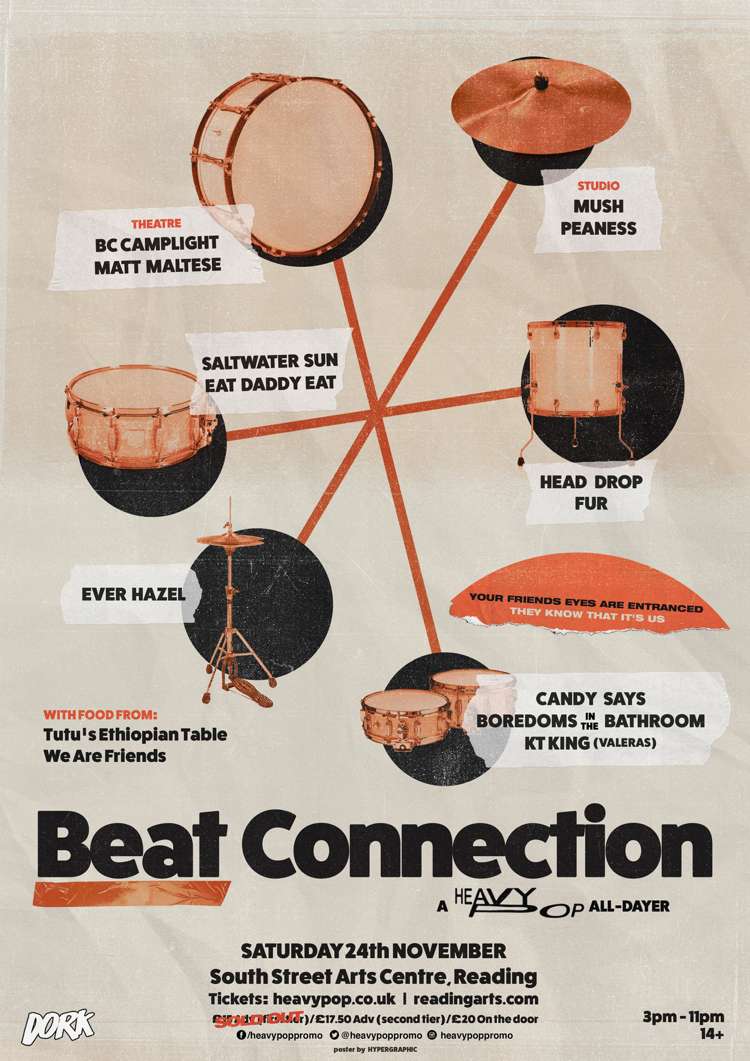 TIER ONE: SOLD OUT | TIER TWO TICKETS: ON SALE NOW

Line-Up and timings subject to change

BC Camplight 'Brilliant as it is deranged' - Louder Than War

Topping the bill is the fast rising alternative star BC Camplight. Signed to legendary label Bella Union, BC Camplight (real name Brian Christinzio) performs at Beat Connection straight off the back of a sold out UK tourand having dominated the BBC 6 Music playlist with a string of recent singles. BC was recently described as ‘like Mozart and Tony Soprano had a kid’ and as that would have you think, he is a truly unique odd-ball songwriter and performer. His latest album Deportation Blues is a chaotic and cacophonous masterpiece chronicling his three year battle with drug addiction, mental illness, and actual deportation that been a huge hit with critics everywhere. As well as creating staggering records, BC Camplight and his band are incendiary live and will be sure to delight next month.

Matt Maltese 'Matt Maltese may be the crooner we need, if not deserve, in 2018' - The Line Of Best Fit

Matt Maltese is a singer and songwriter. Originally from Reading but now based in South London.

Musically, Maltese takes cues from a range of influences, from Leonard Cohen to French musician Francoise Hardy and local icons such as King Krule and Babeheaven. His evocative lyrics are full of rich imagery as he observes London life occurring around him and offer a glimpse into the maturity of his creativity, whilst his dreamy melodies maintain an undeniably accessible appeal.

The Leeds four-piece play guitar heavy alternative, experimental rock tunes akin to: Sonic Youth, Pavement, The Fall, Pixies, Parquet Courts channelling a bunch of other influences descending from an alt-lineage that can be traced back to the likes of Can, Beefheart & Velvet Underground.

Peaness 'Each song contains more than enough subtle surprises to keep you guessing, both in their lyrical smarts and their smooth melodic effortlessness' - The Skinny

The indie-grunge three-piece have had multiple festival appearances (The Great Escape Festival, Handmade Festival, Liverpool Sound City) and features on local BBC Radio Wales and Merseyside, the Huw Stephens show on BBC Radio 1, the Radcliffe and Maconie BBC 6 Music Show, Steve Lamacq’s, and Chris Hawkins on the breakfast show, Peaness are making their way through the country sending their message of peas and love.

Eat Daddy Eat This new garage rock outfit made of familiar faces will drag you into the darker, noisier corners of rock n roll.

Ever Hazel 'It's as if she's whispering her darkest secrets, fears and loves right into your ears with her songs. That's what makes them exceptional' - Breaking More Waves

We Are Friends Delicious vegetarian and vegan food for friends.

"YOUR FRIENDS EYES ARE ENTRANCED. THEY KNOW THAT IT'S US"

Mush are a post-punk, noise rock band from Leeds. Having recently recorded their début e.p. 'Ex-Communiqué' at Suburban Home in Leeds, the vinyl is due to be on sale early March. FFO: Pavement, Television, Beefheart, Swirlies. Sonic Youth.

For tracks go to: https://mushband.bandcamp.com/

BIO Formed in Chester, England in late 2014, three piece indie-pop band PEANESS are the kind of instantly likeable, warm and creative people that can get away with having radio DJ’s blush like a peach every time they have to say the band’s name on the airwaves. Lucky really, as it’s a phenomenon that’s becoming increasingly more common with spins racking up at BBC Radio One, BBC6 Music, Radio X and more as this burgeoning bunch of friends grow quickly into the big shoes that the early press-hype has set out for them to fill.

First meeting at university, members Jess (bass), Balla (guitar) and Rach (drums) built their bond on timeless founding principles of friendship, a desire to escape small town boredom, an embracing of the DIY nature of the music they make, and their close relationships with other local contemporary bands. Their merch often includes handmade limited edition items by Rach’s mum, the band frequently make their own music videos, and their artwork and press shots are all done by close creative friends – Peaness then, is a family affair.

“We started practising in Rach’s bedroom after two of us graduated. Rach was still at uni in the year below me and Balla” says bass player Jess of their early days “We were just messing around - but with a full drum kit and amps - in a terraced house. Rach moved back home to Birmingham for a bit, but when she moved back to Chester we decided to give it a proper go. It was all just a bit of a laugh to start with!”

Referencing the likes of Drenge, Courtney Barnett, Death From Above 1979 as influences in the early days, the band say the key ingredients for the perfect Pea-pop song are “slow-punk, fuzz-pop, indie pop and DIY - it's got to have that punk ethic, but be a bit more polished”, and whilst much of their material is packed with melody and feel-good choruses, their lyrical content treads a smart line of light-hearted commentary on some timely social and political themes. “A lot of songs come from the conversations we have” continues Jess “‘Ugly Veg’ came from a documentary we watched about food waste. We got quite wound up by it and we wrote a song about it. Our songs just come from the things we talk about and things that are relative to people our age. There’s a lot about relationships and escapism too. We might comment on political things sometimes, like on ‘Oh George’, but I wouldn’t say that we’re a political band.”

The trio started performing live in July 2015 and since then have gone on to play alongside the likes of We Are Scientists, The Big Moon, PAWS, Francobollo, The Spook School, Yak, Goat Girl and The Lovely Eggs, with festival appearances at A Carefully Planned Festival, Wales Goes Pop!, DIYPOPFEST, Chester Live, Focus Wales and Sŵn Festival.

Their debut EP No Fun was self-released in 2015 and immediately won fans at BBC Introducing, BBC6 Music and BBC Radio 1, leading to limited edition 7"; AA singles of ‘I’m not Your Problem / Fortune Favours The Bold’ released via Canadian DIY label Kingfisher Bluez and ‘Same Place / Seafoam Islands’ in early 2017 via Odd Box Records, which sold out of pre-orders in two days.

Slots at this year’s 2000 Trees, TRUCK and Indietracks Festivals are the latest in a long line of big steps forward that the band have made in 2017 since signing with UK independent label royalty Alcopop! Records for the release of their new EP, Are You Sure?, earlier this year. Seeing a sharp upturn in both gig attendance and press coverage, they’ve won a raft of support from the likes of Kerrang! Magazine, Rolling Stone, UPSET Magazine, DORK, The Metro, The Skinny, Clash Magazine, Drowned In Sound and many more, for their playful but perfectly crafted power-pop. It’s a partnership which has so far proved lucrative, with the band’s core principles aligning nicely with Alcopop! Records’ sense of fun and staunch DIY ethic, especially as all three members still balance regular employment with the growing demands of the band. “It’s best to do as much as you can yourself” says Jess of their current situation “The joy of the DIY scene is always knowing exactly what’s going on, having control, not being told what to do and not being afraid to say “no” to things. We say “no” to loads of stuff, so we don’t wear ourselves out.”

Spending the rest of 2017 working on new material and slotting in further live dates to be revealed over the coming months, everything’s looking pretty rosy right now down on the Peaness veg patch.

The moral of the story? If you’re thinking about giving peas a chance, you probably should – the world could use a little more of their sunshine-laden indie-pop to brighten its gloomy days of late. 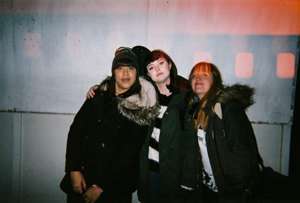 Earlier this year the band released their debut single Habit On My Mind, which was met with widespread acclaim across tastemaker blogs and press, including being heralded by NME as, “the soundtrack to summer evenings” and also sitting firmly in Hype Machine’s Top 10. This was followed by Making Eyes, produced by Gengahr album collaborator James Bragg, which “melted together sugary pop gorgeousness with grunge-flecked licks” (The Line Of Best Fit) and has already had support from BBC London and featured by Radio X as their Shock Of The New.

Produced by Saltwater Sun and Gengahr album collaborator James Bragg, Making Eyes and Habit On My Mind form two-thirds of their forthcoming debut EP Wild, which will drop this November alongside the title track. 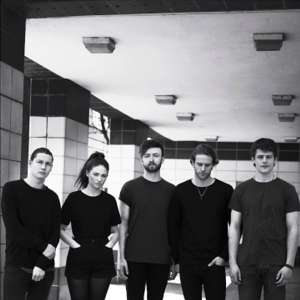 A Surgeon's Hand | Out Now | Watch 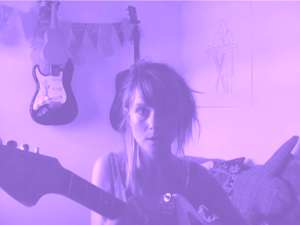 Boredoms in the Bedroom