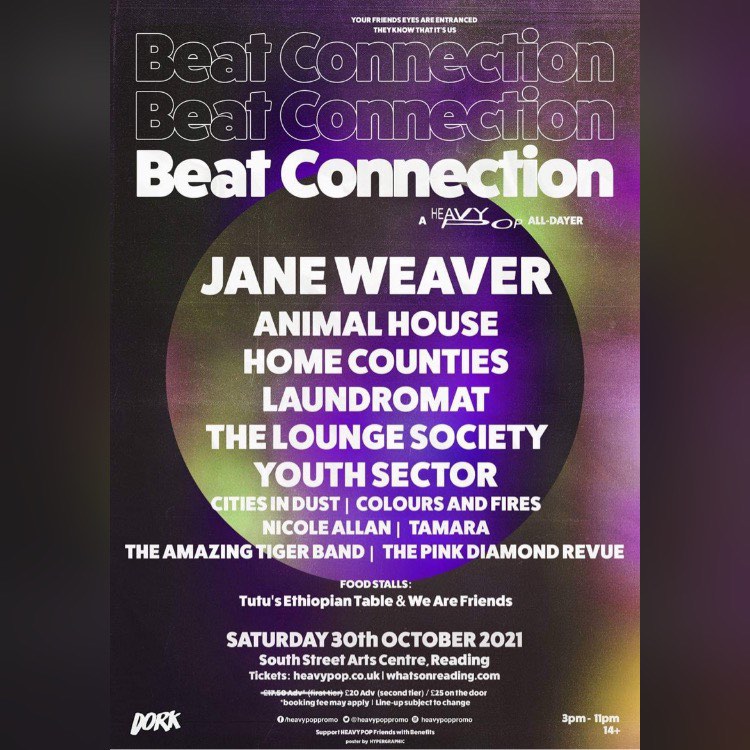 Heavy Pop & Dork team up again for their all day party of music, dancing and togetherness: BEAT CONNECTION.

We are super excited to have psychedelia pop artist, Jane Weaver headlining BEAT CONNECTION this year. Her eleventh album ‘Flock’ has been hailed as a career-best with rave reviews across the board, and we can’t wait!

The five-piece are originally from Australia and bring the sunny party-infused vibes back to Reading following their last appearance at Are You Listening? Festival.

Speedy Wunderground (Black Midi, Squid, Georgia) signed The Lounge Society are much hyped and channeling their rural circumstance into impulsive, energetic punk. A band that are worthy of the hype!

Previous Jack Saunders Next Wave Radio1 spotlight art-rock quintet Youth Sector join the bill. Taking inspiration from late 70s/80s-era funk, most notably in the joyful interaction of the guitars and the bass, you will move your feet.

Acoustic Indie folk band. Performing songs that will make you listen and sounds which will make you think. Our songs gives an insight a personal transformation across genders and relationships. We are active supporters of LGBT+ equality, specifically around transgender rights. Recent performances include Alphabet Soup, Oxjam Reading, Reading Pride, Readipop festival, Are you Listening Festival, Reading Beer Festival & more.

Tamara wailed as a child. Luckily this soon turned into singing, although at times she can still be heard wailing in her songs (or when she laughs). Tamara writes songs that make you feel something.

Tamara also fronts baroque-pop group ‘Death of the Maiden’, and is 1/3 of sea shanty folk outfit ‘The Jolly Grogsters’. She is also the Creative Director of ‘All Tamara’s Parties’.

Anarchic and exhilarating, The Amazing Tiger Band are a whirlwind of loops, samples and lyrics that you simply won’t believe are coming from just one man. But they are. Packing witty and unconventional lyrics and mixing punk, hip hop and indie, The Amazing Tiger Band show flashes of Gorillaz, Jimi Hendrix and Scroobius Pip, sometimes all at the same time.